After all of the Episodes are now available to watch, I thought I'd try out Disney Plus and see what all the fuss was about.

Does it redeem Kathleen Kennedy in the eyes of the Internet?  Let's see... 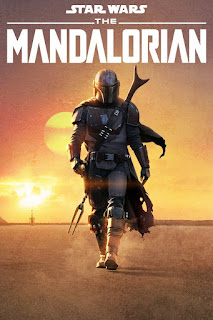 In the wake of the fall of the Empire (following Return of the Jedi), Space is pretty lawless.  That leaves a nice opening for the titular Mandalorian, who is a Bounty Hunter. 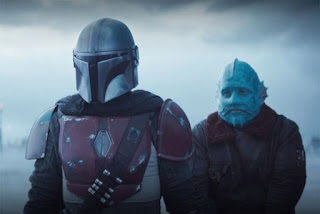 He's hired by a mysterious Client with ties to the fallen Empire (shown by his use of Stormtroopers, albeit in beat up armor) for a big-time job.

How weird is it that the man who was once made Even Dwarves Started Small is now part of this? 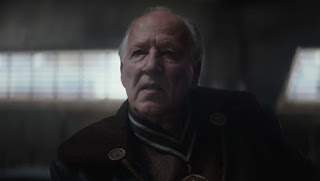 It's clearly not a SPOILER at this point to reveal that his bounty was in fact the famous 'Baby Yoda.'
Yes, it is not Yoda as a baby.
Yes, it is 50 years old (not all life ages at the same rate).
Yes, it is just another of his race.

Will the Hunter have a change of heart?  Will he fall for this little thing like everyone (including my Boss)? 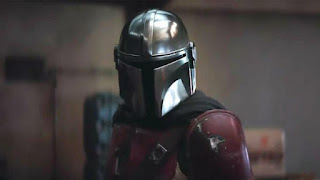 Can he be more than just a Bounty Hunter?  Will he become a Hero?  Will I mention that Gina Carano is now technically in a Marvel Film, a Star Wars property and The Fast & The Furious?

Well, obviously yes to one of those.  To find out the rest, watch the Show('s first half)… 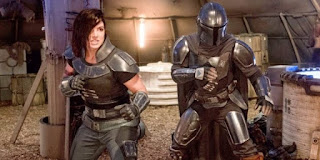 A good, solid adventure to be had.  It can't be a secret that I'm into Star Wars.  I'm White, over 30 and write about Films on the Internet- of course I am!  I'm also a bit underwhelmed by the more recent fare.  I'm not all 'Kathleen Kennedy must be hung in the Streets' like some people- just disappointed.  Thankfully, this Show (at least so far) is not disappointing.  It has been presented with MASSIVE praise over the last few Months.  In my mind, it was doomed to fail.  It 'can't be as good as people say.'  Well, it is not the greatest thing since the Baconator or Cherry M&Ms, but it is quite good.  Pedro Pascal manages to act well without showing his face.  All of the Actors do a nice job.  The Casting is so all over the place- including the Directors of Iron Man, Jojo Rabbit and Grizzly Man in this-, but it definitely works.  Yes, Baby Yoda is adorable.  What really impressed me was the subtle shift in the fourth Episode.  Now free of the main Plot (for a moment), I was curious to see what they could do.  As it turns out, quite alot.  Yes, it is just a version of Seven Samurai.  Even so, it was a nice diversion and it made me optimistic for what was to come.  Here's to keeping the quality up for the remainder and showing bits of Star Wars in a new, refreshing light... 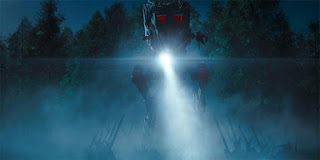 A strong showing.  I'm curious to see if it can build a solid conclusion to this Arc and keep up the quality.
Posted by Alec Pridgen at 7:07 PM