Time and space are relative.

Honorable Mentions (with the reason): Monster from Green Hell (not even green- just B&W), Humongous (too dark to see the Action), The Hurricane Heist (hilariously-goofy), Geostorm (4 years for this?!?), Cosmic Monsters (the Marketing is a lie), Grotesque (bizarre and confusing story), Jurassic World: Fallen Kingdom (a bizarre and disappointing Sequel), Sometimes They Come Back...Again (a non-Sequel that is just too ludicrous for words!), The Meg (China pays for PG-13 fright), Cameron's Closet (a confusing and bloody mess of a Plot) and 1979's Seven (Andy Sidaris' original Film is boring!). 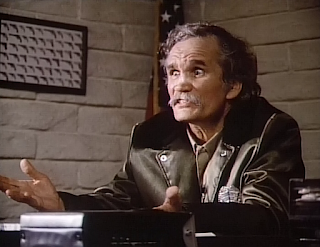 10. Tobe Hooper's Night Terrors: A Film looking for one big thing- a real Lead.  The poor Actress here is given NOTHING to work with.  She reacts to everyone, always does what she is told and never acts in her own agency.  She can't even rescue herself!  Oh and the Film is a confusing mess involving The Marquis De Sade in flashbacks and something to do with artifacts in the present.  Skip! 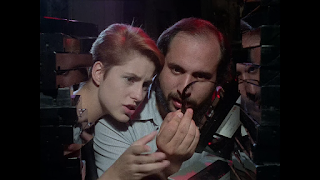 8. A Lure- Teen Fight Club: A waste- of time.  This one is really generic.  Like super generic.  Young people are captured by creepy people.  The only twist- they are made to fight each other.  At least it wears its 'homage' on its sleeve.  It's still not good, but it's not bad enough to rank higher than this.

7. Monsters in the Woods: A Movie that tries to be way too much with too little.  Is it a Film about people making a Horror Film in the Woods that goes awry?  Is it a Film about creatures from Hell?  Yes.  It somehow makes both of these the Plot, leading to a giant Cast of forgettable Characters and a nothing setting that make you ignore the actually-nice-looking creatures.  The Story is bollocks. 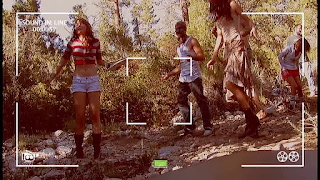 6. Cuban Rebel Girls: An historical oddity is kind of boring.  The Film sounds like a bizarre good time in theory.  Made in the late '50s, this one is about Errol Flynn standing with Fidel Castro in his quest to run Cuba.  Yeah, that ended well!  He didn't live long enough to see how wrong he was, but you will feel like you watched the Film for 70 years.  It has almost no Plot and the bizarre enjoyment of a wasted Flynn is barely there.

5. Ator 3- The Iron Warrior: After a Decade of assuming that this must be 'the good one,' I'm saddened to be wrong.  Ator's Director was not one known for quality.  He hated this Film.  By the transitive property (go with me), this must mean that this Film is good, right?  Nope.  It is very arty and very experimental.  It has some amazing visuals...that are just the actual Island they shot on.  The actual Plot to accompany this...is a big, dull mess.  I couldn't quite be interested enough to be mad, but my long-running assumption that it must be good places the Film here. 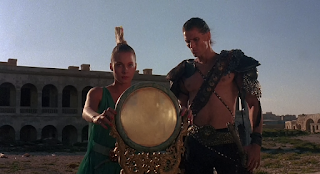 4. The Hellstrom Chronicle: A Film that is kind of fun...but for the wrong reasons.  Do you want to watch a dated Nature Documentary?  Do you love bugs?  Do you need to learn that bugs are better than us?  Has the 42,000 Cable Channels we have rendered this pointless?  The reason this Film makes the Top 5- it's also a lie.  There is no Hellstrom.  We follow him and listen to him and...he's just an Actor representing a composite of Scientists (and their views).  Lame!

3. The Wicker Tree: Making another Film won't bring back your goddamn honey!  Oops, wrong Wicker Man retread.  This time, it is the Director and Writer of the original doing basically the same Story, but...um, Scotland and...um, celebrities.  Robin Hardy wanted you to know that Christians can be hypocrites.  Um...thanks?  The whole point of this is to make a new Film, but not really make one.  At least Lee is in it...in a Cameo...that doesn't matter. 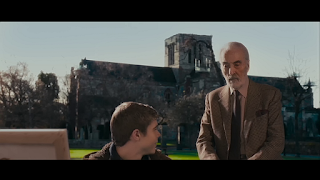 2. The Frozen (2012): People like the new one, so I wanted to punish myself.  Well, to be more accurate, I already owned the Film anyways.  Sadly, my thrifty review was more of a punishment for myself.  The Film is just a re-skin of Carnival of Souls, just without Utah Carnivals, interesting visuals and constant organ music.  In its place, an essentially One Woman Show in the Snow.  Want to watch a decent, but not interesting Actress be confused for an hour?  What's wrong with you- don't say 'Yes!!!'

1. Old Mother Riley Meets the Vampire: Another bad Comedy on a Holiday- yea.  This one is a bit ancient- from the early '50s- and came about for very sad reasons.  As mentioned in the Review, Bela moved to England for a bit to star in a revival of Dracula.  It didn't go well.  As such, he needed to get back and didn't have the funds.  Guess where the money went.  As such, he agreed to do this awful Film involving a man in drag and a worse version of The Phantom Creeps.  It's not funny...or scary...or interesting.  It hurt- alot. 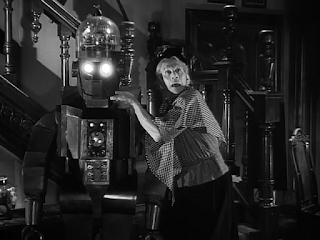 There you go- I suffered various forms of self-inflicted torture for you.

Here's hoping nothing is as bad as arguably the saddest Bela Lugosi Film (which is saying alot!)!
Posted by Alec Pridgen at 9:00 AM