After over a decade, I had to go back and dig this one up.  This is Dead & Buried, a 1981 Film that I think needs some more attention.  How often do you hear about this one?  How often do you see it on Lists of 'Horror Films You Missed' or 'Horror Films You Need to See?'  Almost never- at least in my experience.  Let's take a step towards fixing that.  The Plot involves a strange town that likes to kill strangers.  Why?  What is their ultimate goal?  It comes from Director Gary Sherman, who has a good-sized Resume, but never seemed to quite break out.  He brought us Poltergeist III, which is certainly the eeriest of the three (for all of the wrong reasons).  A big name here (as seen on the Poster) is Dan O'Bannon, who hopefully needs no introduction.  Its other main Writer (2 for the Story, 2 for Screenplay and one for the original Novel) is Ronald Shusett, who also worked on Alien, as well as Total Recall, King Kong Lives, Freejack and, no joke, Above the Law.  Due to guild rules, he's co-credited on every Alien-related Film/project, so his IMDB Page looks really busy!  I don't want to give too much away just yet.  In fact, the reason I avoided reviewing it then was to not give the Plot away.  I can write without major SPOILERS now (plus the Film is 12 years older now), so let's dig right in... 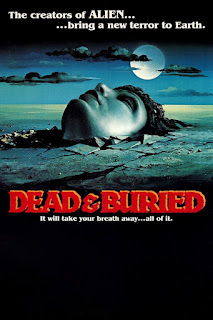 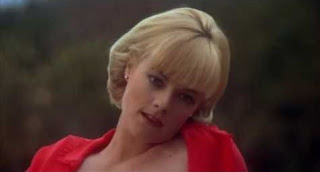 The local residents attack him!
They beat him, tie him with a net and burn him alive! 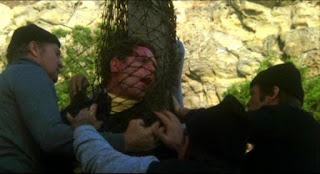 This is the first of many strange incidents that draws the attention of the Sheriff.
I do wonder why he only seems to notice it now...but that is explained later. 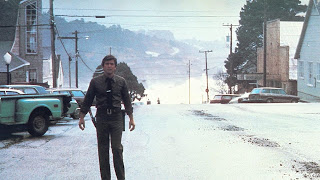 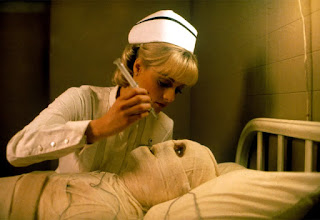 Meanwhile, the Town continues to go after any strangers that might show up, be they hitchhikers or visiting families.
What is motivating this?!? 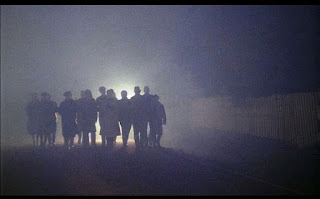 The Town Mortician seems to be up to something, given how insistent he is on always working on every body that show up.
Then again, he was Grandpa Joe from Willy Wonka, so he can't be evil...right? 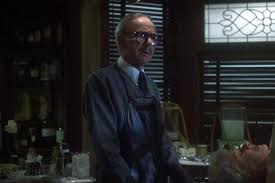 Well, I wont SPOIL the ending for you, as it is too good.
The non-SPOILER version- don't believe everything you see...or even what you remember.  The End. 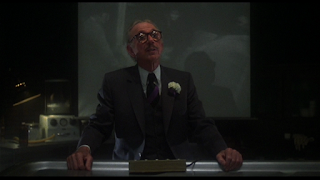 This is still really damn good.  How do people not talk about this Film that much?  Granted- it's not some obscure rarity per se.  It just got a 4K Release, so it is doing better than stuff like Elves.  Even so, is it ever compared to others from this period as far as quality?  Not that I've seen, so I'm counting this.  If you want to know what a hidden gem of a Horror Film looks like, look no further.  Big time Writer, strong premise, but otherwise less than well-known Film.  Without SPOILing things too much, the Film has some great twists and turns.  They all feel earned too, so it isn't just a twist for the sake of it.  When all is said and done, the whole thing makes (morbid) sense.  It could have easily thrown in one too many twists/turns or done one that didn't tie to the Film.  The Setting is nice and the tone of the Film amps up slowly to dread.  Given the nature of it, this is probably a love it or hate it kind of Film.  Do you like the turns and where it goes?  Do you hate them?  Regardless, it is all well done and a credit to all involved.  So many times I'm afraid to rewatch a Film after a long time in case it doesn't hold up.  With quality Writing, strong Acting and make-up work by Stan Winston, this was never going to be like that. 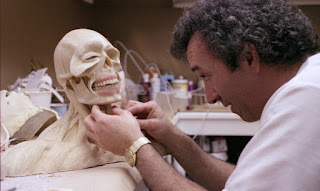 Next up, I cover a Rutger Hauer Film.  This one has a pretty random and bonkers premise, so I'm all in!  Stay tuned...