8 Crazy Moments From 'Voyage to the Bottom of the Sea'

As a fan of weird Films and TV Show, I'm drawn to the past.  With as much crazy as we get these days, there's a certain extra level of insanity from the 1960s.

Was it all of the Drugs?

Regardless, I talked a bit about this in the past, but I want to focus more on one Show that I've been watching weekly on DVR (since it runs at 4 AM on ME TV)... 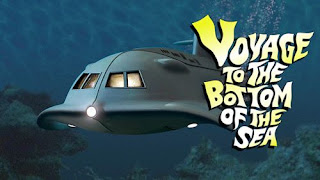 An important note: the Show was semi-serious for the first 2 Seasons.  It was also in B&W.

As it got into Season 3 and 4, it was in Color and got crazy as hell.

8. Vincent Price as an Evil Pupeteer: Need I say more? 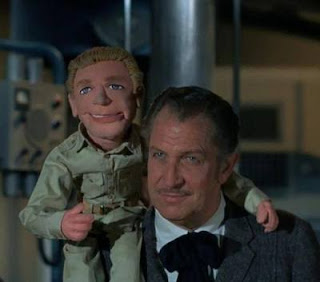 7. A Mummy: If you didn't know that this Show got weird, here's a Mummy.

Remember when this was about a Military Submarine and Science?  Well, here's a Mummy. 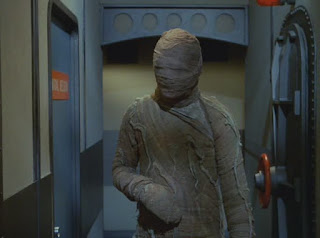 6. Irwin Allen's The Jungle: This one needs a bit of explanation, so bear with me...

An Alien hides on the ship in plain sight as part of the Crew.  He has tiny Soldiers that he can grow to help him.

His plan: terraform the Earth into a Jungle for his people.  Naturally, the Submarine is the first place to go... 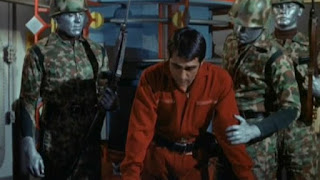 5. Not the Illuminati: One day (or night- who can tell underwater), the ship is attacked by a strange force.

It turns out to be the work of these fish men who have a very complex plan.

Just kidding, they turn one crew Member into one of them (it is easily reversed FYI) and get beaten the way that all of these guys do. 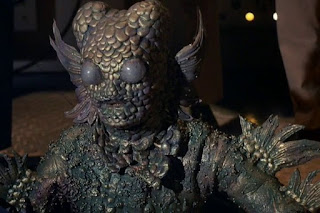 4. A Magic Pirate- Why Not?: So Blackbeard is back.  Was he on the Show before?

He can teleport at will thanks to his magic sword and can turn people into his 'crew.'

Yes, the same guy who was turned into a fish man is transformed here.
Yes, these did air right after one another. 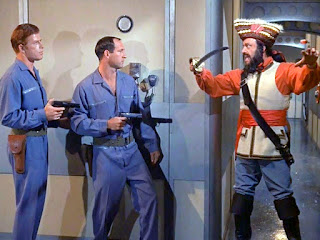 3. The Were-Yeti Episode: Right off the bat- yes, there is also an actual Werewolf Episode too.  This one, however, has some strange overlaps.

An attempt BY US at turning ice into Jungle leads to a Base in the Arctic going silent.
The survivors are taken on-board, but one man is not what he seems!

He transforms against his will- since the radiation that turns ice into jungle turns people into...this- as The Abominable Snowman! 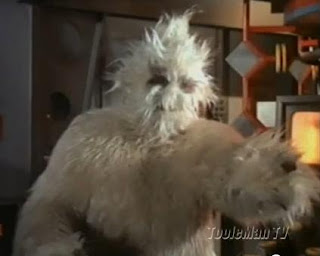 2. Do you guys remember anything?!?: A Golden Lobster Alien shows up on board.  On any other Show, that would be the weirdest part.

After attacking the crew, it then speaks and says that isn't their enemy.  It says that it wants to help mankind.

It's lying.
They almost all fall for it.

The Captain makes a point about how you can only trick people once.  How did it trick you this time?  Every one of these creatures is the bad guy on this Show!!! 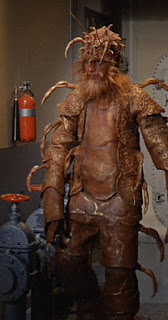 The final 2 Seasons have around 50 Episodes in total, so I'm not even covering all of the crazy.

If you're a fan of goofy Sci-Fi, check this out.  It's always played straight too, so it's the most enjoyable kind of nonsense!

Should I cover more Shows like this?  Let me know...
Posted by Alec Pridgen at 10:23 AM