A Story most known for its Disney adaptation gets a darker take here.  This 1997 Film was made to be released in Theaters, but ended up on Showtime.  Showtime- We're Not HBO.

In the time since this one came out, we've had a few more Films covering this Story.  At one point, we had Mirror Mirror coming out around the same time as Snow White and The Huntsman (which somehow got a Snow White-less Sequel).

Can this match up to the original Grimm Fairy Tale though?  I'll put some comparisons in as we go.

The Cast includes Sam Neill and Sigourney Weaver, who supposedly took the role since it gave a more nuanced part for the Evil Queen.  She wanted to know why a Good King would marry her. 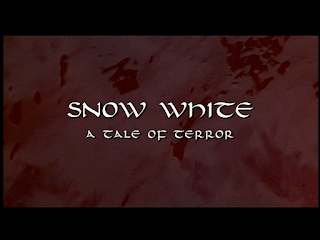 In the Cold Open- it is quite snowy out there- the Good King and his Wife get in a carriage crash and she's wounded.
She tells him to save the baby, which means (implied but not shown) cutting her open.
NOW the Film starts properly. 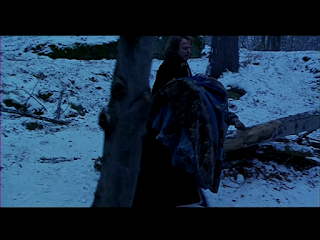 Years later, Snow White is a precocious young girl who loves her Dad.
Nothing can come between them... 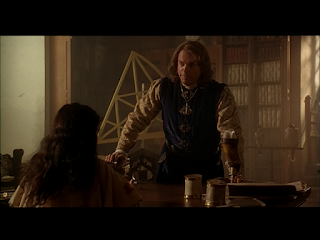 ...except his new Wife (Weaver).
In the original Story, she marries the Good King when Snow White is only a year old and learns that her beauty will be surpassed by White when she's seven.
Um...ew, I think? 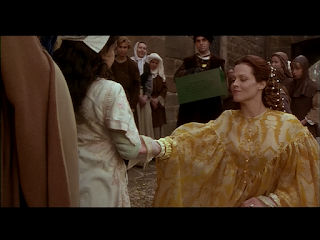 Things turn for the Queen when she has a still-birth and is apparently rendered infertile.  Mind you, I think they still used leeches, so...maybe don't trust the Science here.
This was aggravated- at least in her mind- by Snow White wearing a white dress (rejecting the one she was given by the Queen) and everyone is distracted for her (dubbed) singing.
Time to consult the Magic Mirror. 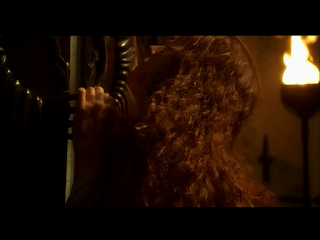 Instead of the Huntsman, she uses her long-time companion (a Mute Master of Sleight of Hand) to try and kill White (who's about 18- hopefully).
He, of course, fails and kills a pig instead.  Did...you just rip-off an American Story for your German Folk Tale Adaptation?
She ends up with...well, not the Seven Dwarfs.  It sure beats using CGI for the effect like one Film did. 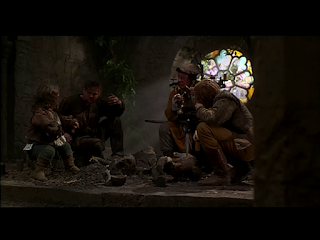 When the Queen learns that she's still alive, she, of course, kills her lying Assistant.
After that, she uses her magic to try and kill her, which leads to some of the not-Dwarves to die via crushing Earth and falling trees.
The Leader is not a fan of this. 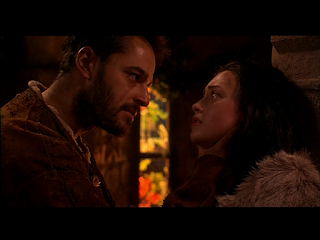 The Evil Queen finally resorts to transformation and deceit to poison Snow White.
In the Story, she tries this three times.
First, it's a crushing corset.  Then it was a poison comb.  Lastly, it was the apple.
After all of this work, Snow White is fake dead for....five minutes of Screen Time.  No, really. 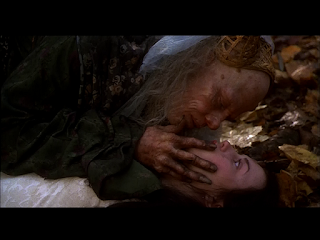 Alongside her former Fiancé (a character so unimportant that I didn't mention him until now), the trio try to stop the Queen and save the King.
They go full Horror Movie here, with crazy people, killer dog and more. 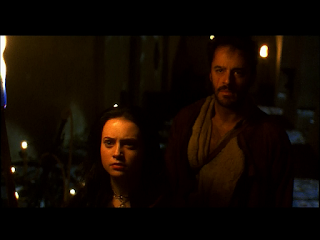 The Fiance dies (oh no?) and we get a big showdown between Snow White and the Queen.
Of course, good wins and the Magic Mirror shatters, wounding her before the fire kills her.
All of our (living) heroes reunite as the Cabinet that held the Mirror closes.  The End. 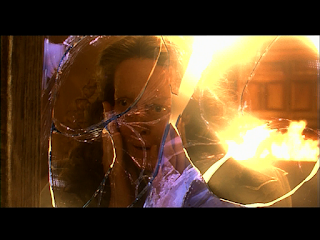 A good, if oddly-paced Story.  I like the Setup.  I like the finale.  In the middle, we find some problems with too much focus on some things and not enough on others.  Problems with the middle is definitely an American problem.
The Production Values here are quite good.  It looks like a Period Film, even if it is an imaginary Period.  They shot it in Czechoslovakia, which aids the Film to look as realistic as possible.  I'm sure they have stories.
Weaver shines as the Queen, who feels like a real person who manages to be driven crazy by her own imaginary problems and slights.  Yes, White isn't nice to her.  She is the second Wife, after all, who's there to 'replace' her Mom.  Did the King tell her how she was born, by the way, or did he gloss over that?
Snow White: A Tale of Terror is good, but flawed.  It is chock full of style and atmosphere...but a bit slow in the middle before it nails the ending.  It also features a 'knock-off' Wizard of Oz Character... 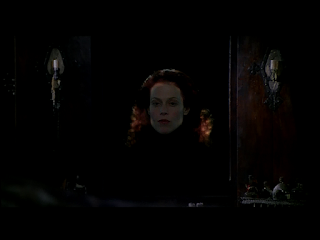 Next up, we stick around the '90s for a little bit longer.  Do I go with Psychological or Medical?  Stay tuned...