Before you see DC's Film about people fighting mind-controlling alien fish that latch onto your body, watch this one.  It's (Robert A Heinlen's) The Puppet Masters, a 1994 Film based on a Book.  Mind you, a total of NINE Writers (none of them Heinlen, since he died in 1988) worked on it too.  Too many cooks?  I hope not.  The story involves, well, what I just teased.  I've known about this Film for a long time, mostly due to it sounding like Puppet Master and its seemingly-never-ending Series of Films.  Now I actually watched it!  Was it good?  The Director is Stuart Orme, a British man most known for Directing lots of Music Videos in the '80s.  The Writing process was more complicated, as a total of NINE people worked on it.  Notable names include David S. Goyer, who has written some very successful- and very divisive- Films.  The push-and-pull was apparently between the Studio and people related to the Heinlen's Estate.  Would we get a faithful adaptation or a broader, more major market one?  To find out, read on... 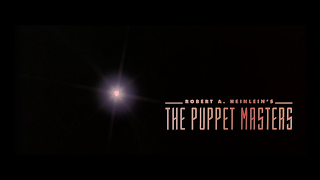 A spaceship crashes in the Midwest and seems to be affecting the Residents.
A Government Agent- Donald Sutherland-, his Son- Eric Thal- and an Expert in Theoretical Biology- Julie Warner- arrive to find out what is up.
Also Richard Belzer, which is about how much of a role he gets. 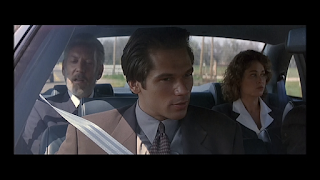 The Townspeople seem to be controlled by some sort of creatures and go on the attack!
They manage to fend them off and escape, bringing a (dead) alien back with them. 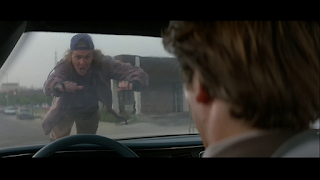 They study the creature and find out that it can control humans via tendril that enters the brain.  They can maneuver people around like puppets, hence the Title.
Belzer ends up controlled by one- when it got him is not 100% clear (a pattern)- and tries to escape with data he/it stole on what they knew about the aliens so far. 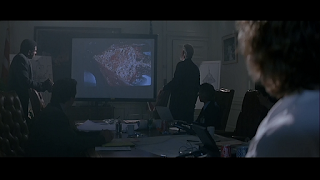 It escapes and our Heroes have to hope that it doesn't relay the information.
In the meantime, they need to figure out how to stop them! 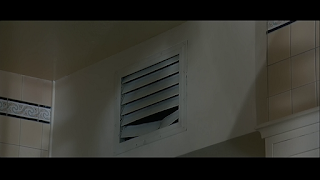 It turns out that it didn't escape.
Despite them checking people thoroughly in the last Scene, they don't check our Hero and he nearly gets the President infected.
Captured, his Dad tries to break him free. 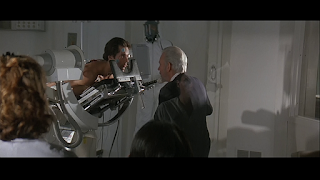 They figure out some secrets about the creatures as they continue to infect the surrounding Town from where the ship crashed.
A romance between our Hero and Warner is thwarted when a creature gets on her and runs off with her body.
How did it get on her?  Something to do with it being on his cat (from earlier?) and getting on her outside. 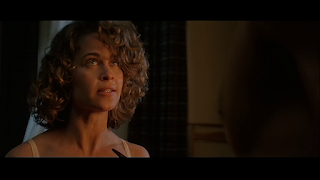 How did they stop them?
With guns, of course.
Also something involving spreading a viral version of Encephalitis (since the creatures are 60% brain). 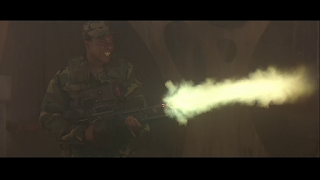 However, one last Puppet Master gets on Sutherland, leading to a climactic finale where his Son shoots him in the shoulder and kills the creature.
Well, this time when Sutherland was mind-controlled by an Alien, it had a happy ending! 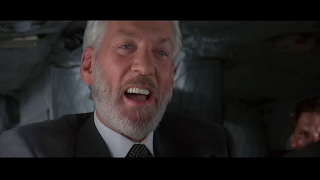 In true '90s Fashion, our Heroes walk off in a long shot making (mostly ADR) banter.
Seriously, it's in plenty of Films like Rush Hour, for instance.  The End. 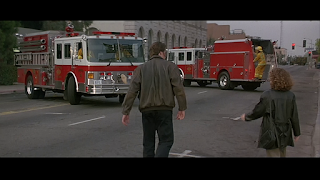 A fun, somewhat shallow experience.  The Film is paced and set differently than other *actual* Body Snatcher Films.  They find out about the Aliens pretty much right away.  This one jumps right to 'figure out how to fight them.'  Of course, to reach feature-length, they still have people constantly fail to protect themselves and get infected.  For instance, they specifically say they can't use the Local National Guard to save the Town (since it was infected).  So why do the Soldiers not do ANYTHING to stop said National Guard when they show up?  Oh right- so the Plot can happen.  Our Hero being controlled early on is a good twist and I'm kind of sad that they didn't do more with it.  Having him break out (admittedly there are side effects) kind of undermined the drama for me.  It showed that they could break out without the worst side effects (a now-free Belzer would kill himself at the loss).  So when Warner is controlled, is it as dramatic?  Not really.  The Aliens look really neat and they work around limitations of the time.  They almost solely use practical effects here (save for bits like an alien door and bits of Screening)- great.  The Acting, as a whole, is quite good.  I wonder what would have happened if it didn't take so many Writers to make this one and so many Producers trying to set this tone.  It's been a long time since this one- why not a Remake closer to the source material?  Until then, just remember to use your best assets to find Aliens, even if it means showing a little skin. 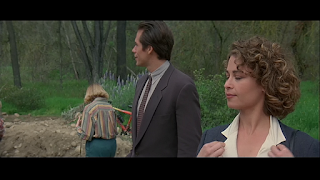 Next time, I look at my second Body Snatcher Film.  Wrapping up the Remakes, it is the 2006/7 Version with added Car Chases.  Stay tuned...