After all the insanity we've lived through in real life, we might as well enjoy some fictional insanity.

If you're looking for insanity, may I introduce you to Nicolas Cage... 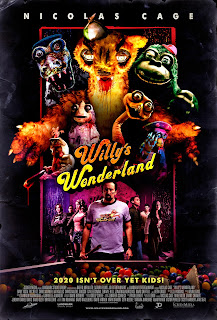 A man- Cage- has his car ruined after running through a spike trap and is offered a devil's bargain.
If you want it fixed, you need to spend the night at Freddy's...I mean, Willy's Wonderland. 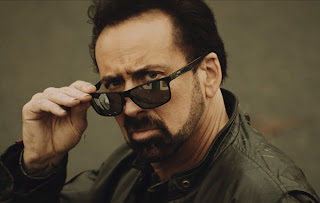 The defunct Kid's Restaurant/Playhouse is full of animatronic wonders that were seemingly-designed to haunt kid's nightmares.
As it turns out, your fear of them is warranted. 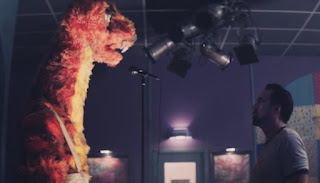 Due to reasons I won't SPOIL (it's a bonkers explanation), the creatures live and want to kill anyone.
I guess if there's no kids, a man who's spent millions on buying Comic Books and Dinosaur Bones will suffice. 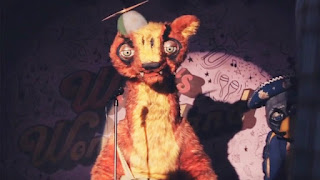 When new people show up (in an attempt to destroy the place), can he keep them safe?
Does he even care?
To find out, see the Film on Digital/On-Demand. 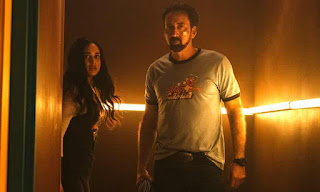 A sometimes fun Film that manages to deliver the crazy.  The premise is crazy.  The execution is usually quite good.  You get Cage being weird.  For some reason, he never talks.  Ever.  If you want an explanation, you don't get one.  I'm kind of disappointed that we don't get one.  Is he missing his tongue?  What's up?!?  You do get an explanation for everything else- as crazy as it may be- so this part stands out to me.  Getting past that, the Film delivers some big, silly moments with the fights between Cage and the creatures.  They sure are polite to fight him one at a time and to take breaks.  They do make a META joke about it in the Film- indirect, mind you- so I guess it's all good.  The only problem is that Cage never quite lets you root for him on a deeper level.  When people are in danger, he's not exactly rushing out to rescue them.  So the problem here is that the rest of the Cast is basically there to fill out the Kill Count for the Film.  They aren't all that interesting.  They just take up space until they die.  For every inspired moment or two, there's just them being pretty dumb.  If you can take the good with the bad, you'll have enough good time with Willy's Wonderland.  Just give in and embrace the insanity... 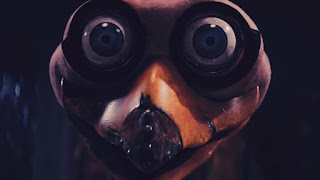 A freaky feature that sometimes delivers on its wacky premise.  The rest of the time- kind of uninspired.  Oh well.