Hopefully it is better than the last thing with 'Apocalypse' in the Title.

As is the norm, I will sometimes check out the first Episode of an AHS Season to see if it draws me in.  Not much luck so far.  Will this take- which connects loosely to a Movie Review I have planned- on a different kind of story do the trick? 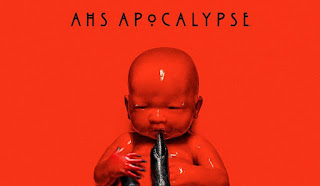 Since this is TV (even Cable TV), we only see one explosion and see it from the perspective of one City (Los Angeles). 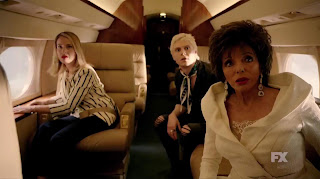 We see that there is a bit of Eugenics going on as a few people are taken to a Shelter before the Bombs hit due to their 'superior genes.' 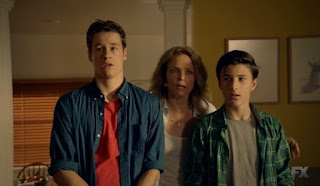 This reunites our original Protagonists (some rich folks and associates) and the new ones in a Fallout Shelter that is less than ideal.

'Quicksilver' here, for one, is not taking it too well. 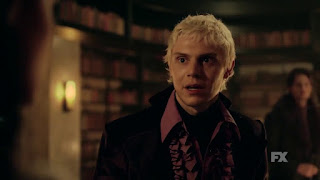 With a strong, domineering woman with secrets in charge (naturally, it's Paulson), is there hope for survival in the Shelter?

Is it better to go out and possibly die from radiation?

To find out, watch the Show.  I saw it on Netflix, but there are probably 60 other ways too. 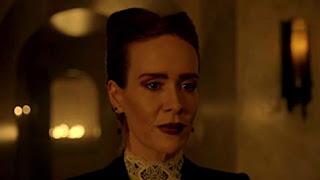 A decent, but vague start.  This one is all about building mystery and intrigue.  In that regard, it works.  You know that there's something extra weird going on here.  On the other hand, very little of note happens when they get past the setup.  Paulson is evil- got it.  They can't get out- sure.  Is there anything else?  This one isn't using padding per se, but they definitely have a checklist called 'Things We're Allowed to Show in the 1st Episode' and it's a tight one!  Anything bigger or more interesting will have to wait.  There's a fine line between playing your cards close to your chest and, well, not playing them at all.  The Show is several Seasons in, but each one is also a bit self-contained.  Each new first Episode is essentially a Pilot, so it has to do what Pilots are designed to do.  In this case, I'm not sure that I got enough to make me want to come back for more.  It's a pretty common problem with the Show, to be honest.  I've watched a different ones and rarely gone back for more.  Judge me harshly if you want, Internet!  The other thing, of course, is that most of the Seasons take a big, dramatic turn after a few Episodes, so alot of this setup is less important than it should be.  If this had delivered more and teased less, I might be sold.  At least having Not Jason Mewes does help a little bit... 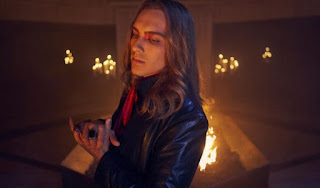 A sort of interesting start and I'm *kind of* curious to see it play out.  They just focus so much on this one location that it is just hard to think of enduring more Episodes trapped inside of it.
Posted by Alec Pridgen at 11:58 AM