Where's Netflix to adapt this into a Hit Show too?!?  This is Karate Warrior, a 1987 Film from Italy that was *inspired* by The Karate Kid.  To be fair to the Film, it is not even close to a shameless rip-off.  It does reuse key ideas and Themes, but isn't as blatant as many others from this time.  This is more original than the 200 different Mad Max-clones, but less original than, you know, an original Film.  Curiously and completely accidentally, the Film is almost more like The Karate Kid: Part II!  Here's another little factoid for you: there are more Karate Warrior Films than Karate Kid Films!  Somehow, its Producer- the man behind Killer Crocodile- spat out SIX of these Films onto the Video Market between 1987 and 1995.  I probably won't cover them all any time soon, especially since it abandons this Plot and its Characters after the 2nd one.  Oh what a Plot and Characters we have too.  In the Film, a young man goes to The Philippines to visit his Reporter Dad and runs afoul of a Gangster/Karate Expert.  What Town doesn't have one of those?!?  One last note before we begin, the original Italian Title is far less good than the English one.  It translates to 'The Boy with the Golden Kimono,' so...yeah, I'm sticking with the US Title... 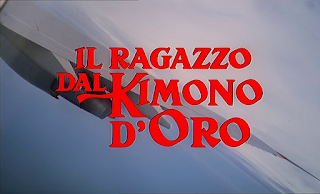 Our Anakin Skywalker-looking Lead is Anthony, who is in The Philippines, since Films can be shot cheaply there...I mean, to see his Dad.  He immediately makes an enemy with the local Mob Boss.
Seriously, watch the Documentary Machete Maidens Unleashed to hear all about this time. 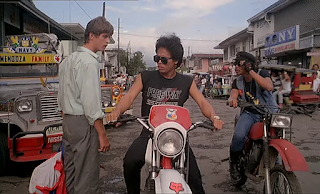 While reacquainting with his Dad, he also meets a local Girl who he falls for.
Who wouldn't fall for a guy wearing a...Jacksonville Bulls Shirt?
Google the Team and then wonder how their Jersey ended up in The Philippines and in an Italian Film. 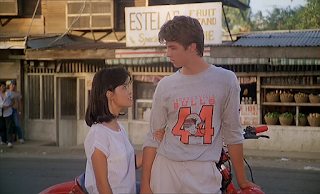 He romances her and I only mention this as an excuse to show it appears they were reusing locations between this and Killer Crocodile 1 and 2.
It's not Racist to say that Rivers look alike, is it? 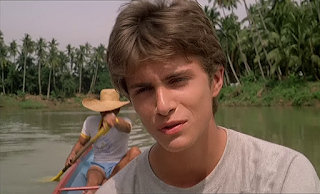 Anthony learns that the guy who annoyed him is a Mobster who runs down Businesses for money AND is a 5-Time Karate Champion.
He's the Booker T of Filipino Karate Champions/Mobsters.  Can you dig it, sucka?!? 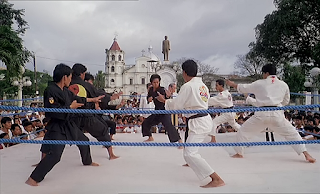 Anthony confronts the guy and bravely...kicks him in the dick while he's blinded by a camera flash.
He drives away on his bike and escapes the bad guy.
Interestingly (to me, at least), we see the Lead riding the bike clearly, but the bad guy is always wearing his helmet (it's his Stunt Double). 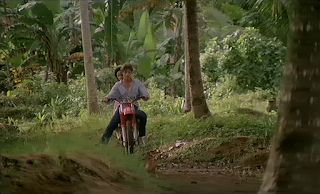 The gang shows up to beat up our Hero the next day (I think- time is relative in this Film) and leave him to die.
Sadly, they don't do it in skeleton outfits. 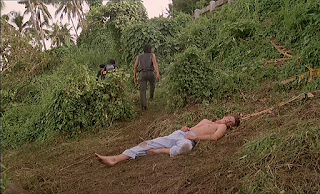 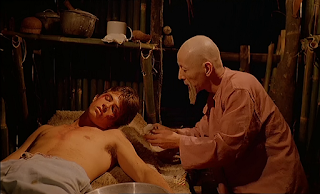 He trains our Hero in the art of Kung Fu over another vague period of time.
Since Anthony is 'pure of heart' he can do the Dragon Strike- essentially a Ki Strike.
He uses it to knock out a random Bull- why not? 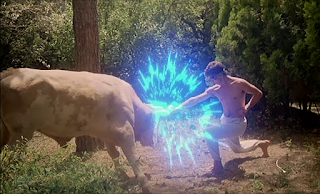 He recovers, finds his Parents (the Mom shows up to basically do nothing) and challenges the Villain at the Karate Tournament.
He wins Round 1, forgets how to fight for Round 2 and then fights blind to win Round 3 with his Ex Machina Punch.
It suddenly gets all sad when he goes home and vows to return (in the Sequel).  The End. 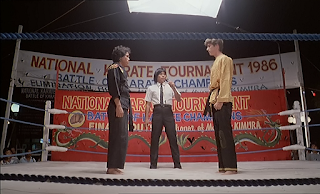 An oddly dramatic Film for how silly it gets by the end.  So, seeing the final product, is this a really blatant ripoff?  No.  As I said before, it definitely wouldn't exist without Kid being a big hit.  The basic beats- young guy learns Karate from Master, romances girl and wins Karate Tournament- are there.  In place of the rest of it, however, you get a Mobster, The Philippines and a magic punch to replace the Crane Kick.  The 2nd Kid Film features Daniel-san going to Japan, so this Film is almost more like that.  The Sequel came out the same Year this was being made (see the Banner for the 1986 Karate Tournament for proof), so it could be a case of Movie Plot Gumbo.  Take a bit from here, take a bit from there and BOOM- it's a new thing.  On its own merits, the Film is fine.  Our Hero is a bit apathetic, but also sometimes overly-aggressive at times.  Yes, the Mobster is bad, but he's combative with the guy before he even knows that.  He's also kind of a dick at times, justified or not.  There's also the issue of him knowing NOTHING about Karate and being an expert enough to beat a guy who's won the Tournament FIVE YEARS IN A ROW and wins by challenging all of the Finalists AT ONCE.  There's no excuse/setup for how he can win other than his Protagonist Powers/Plot Armor.  It's still a fun enough Film all the same.  Let's close out with a look at our Director's dopey, anglicized name (despite the Credits being in Italian)… 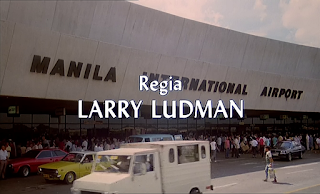 Next time, I cover a Film that barely had a DVD Release, so my copy is on lovely VHS.  See a Universal cash-in that is also kind of a rip-off.  Stay tuned...