A forgotten tie-in to a Show that was also a shameless cash-in to rip off Disney.  This is (incoming wordy title) Hercules & Xena (The Animated Movie): The Battle For Olympus, a 1998 DTV release.  It was obviously a spin-off of both Sam Raimi-produced Shows.  In addition, it existed to have a similar Plot to and be like the Disney Hercules Film.  I'm sure that you can find someone that says otherwise, but...come on.  Let's break it down, shall we?  Both are Animated.  Both feature Hercules.  Both feature a Plot involving the Titans coming back to take over Olympus.  The middle parts that make up the rest of the Plot- like with Karate Warrior- are different, so it isn't like those Good Times or Dingo Pictures Cartoons.  The big draw here is that the Stars of the Live-Action Shows are here to voice their Characters.  Some are good and some are 'meh.'  It is notable for a couple of reasons regarding the Show too, but I'll get to that.  In the meantime, let's see why you don't remember this... 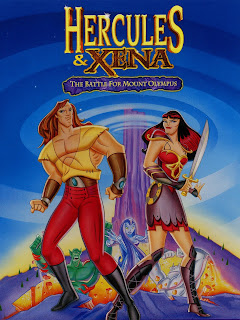 Hercules and Ioales go around helping people.  Hercules also goes a good 5 minutes without speaking, choosing instead to grunt instead.
I should mention that the Art Direction has a, well, Ren & Stimpy vibe to it.
No, I don't know why they went this way. 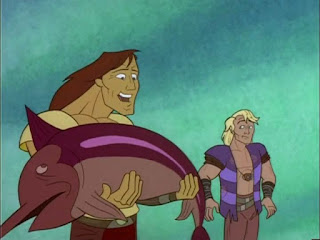 Xena is a badass lady who helps the poor and beats up bad guys.
This follows her appearances on Hercules (VHS Release promoted on this tape) and her new Show. 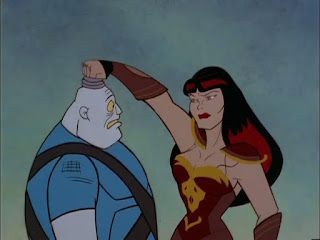 The Titans are released and now threaten to take over Mount Olympus, where they once ruled. 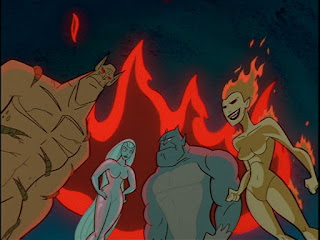 Hercules- who has daddy issues- refuses a call to help, even when it comes from Aphrodite.
In his defense, it did just appear that Zeus kidnapped his Mother. 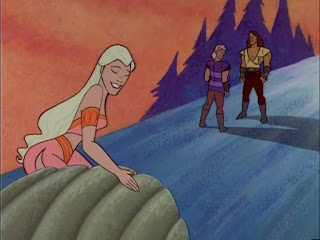 To get help from someone else, Artemis decides to do the only logical thing- turn Gabrielle into a giant Eagle.
Wait...what?!? 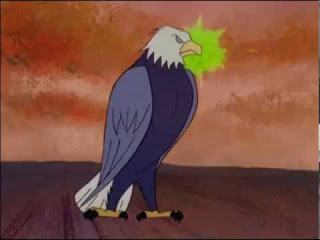 Hera is the bad guy here- making her first humanoid appearance in the franchise here- and she's using the Kronos Stone to command the Titans.
Can Hercules and Xena put aside their issues and stop the Titans?
Yes.  I just ran out of Screen Caps, so deal with it.  The End. 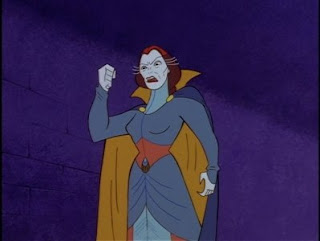 A silly and strange Film.  The idea is to make a cheap tie-in for two successful Shows.  Got it.  To make that work, they made a weird Cartoon that looked like Ren & Stimpy.  Was Hercules a Comedy?  Not really.  Was Xena?  Not really.  So why make it look like this?  The whole thing just feels like a weird aside that doesn't seem to be made by the same people.  To put it in comparison, the man most associated with Ren & Stimpy did updated versions of Mighty Mouse, as well as Beany & Cecil  His quirky humor on that made sense- it was a new version.  If you can get past how odd this one looks, the Film also sounds odd.  As noted, Sorbo grunts ALOT in this.  I'm guessing there must be hours of this somewhere.  On a better sound note, Lucy Lawless sings and it's actually pretty good.  The Plot is nothing special and it sure takes awhile for our Heroes to actually meet up.  With a few exceptions, there are no real surprises to be found.  The Film is pretty rare, mostly due to nobody bothering to release it on DVD in any major way.  It clearly needed someone to be a big breakout Star to get that- see Young Hercules.  In any event, there are definitely worse Cartoons...but there are also better Hercules Cartoons... 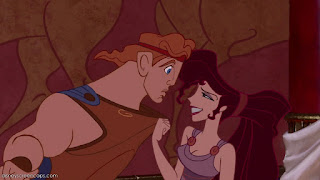 Next up, a freaky '70s Thriller about Medicine and Money.  If you can't trust your Dad or your Doctor, who can you trust?  Stay tuned...