As far as scary Movie Monsters go, this is pretty low on the list.  This is Embryo, a 1976 Sci-Fi/Horror Film.  No, it's not really about a killer Embryo.  A being has to be at least born to be a threat.  Granted- it could be a killer baby, provided that it has teeth like in the It's Alive Trilogy.  That or could be aborted, dumped in toxic waste and then come back for revenge.  Yes, that is a real Film.  What is this Film then?  This is one of those 'Science can be dangerous' Films that were all the rage in this time.  Science- it is evil...or something.  I wish that things have changed, but people think that Microsoft is putting chips in people through shots and that Liberals want to force everyone to have Sex Change Operations, so...maybe not.  In this case, a Doctor is trying to preserve life outside of the womb.  What a rat bastard!  To make a Movie happen, he makes a few (or many) mistakes along the way.  Notable Cast includes our Lead- Rock Hudson.  Oh boy, I'm really going all in for Pride Month, aren't I?!?  This is just a silly, well-meaning piece of silly Filmmaking, so I won't get *into the weeds* on the subject.  Mind you, there is still stuff being written about him and the situation, even as recently as 2010!  Other Cast Members include TV/Film mainstay Barbara Carrera and Diane Ladd, an Actress notable for many, many Films.  For me, it is Carnosaur.  There's also another name that I won't SPOIL here just yet.  To see how good Science can go bad, read on... 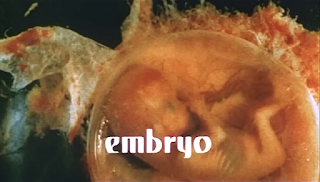 A Doctor- Hudson- is trying to provide a way to keep life sustainable outside of a womb, in case of such events as a miscarriage.
As luck (I guess!) would have it, he hits a pregnant dog with his car and can test his formula/devices on them.
The dark convenience of this is just that- nothing more.  I was expecting a twist that never came. 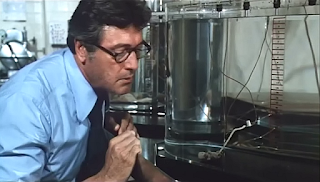 His work proves successful on one of the three embryos, with the dog aging up faster than normal thanks to his formula.
After LOTS of Voice-Over explaining his work (seriously, it's like they paid Rock by the word), he works on a human fetus.
Can he save it too? 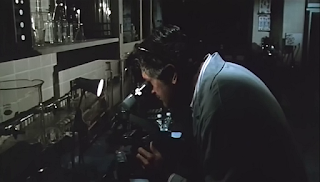 He can!
The fetus grows to full Adulthood thanks to his drug, but he manages to stop the increased aging.
Now it is a Bond Girl- neat. 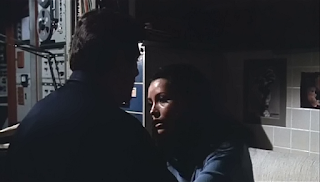 She picks up all of her knowledge while she is hidden in the Mansion.  He thinks that things are going great.  Is he right? 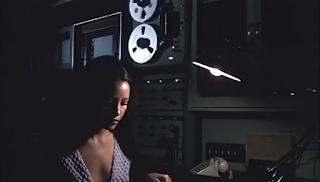 In a random-ass Scene, he takes her to a Party to see how she can interact with people.
She runs across a Chess Champion and beats him based on her reading all about the rules.
He doesn't take it well and he's...Roddy McDowall?!? 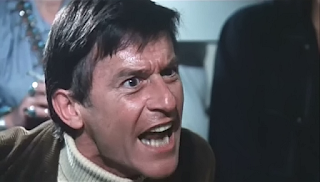 Well, forget about him- he's only in that Scene.  Bye, Roddy!
Back home, the 'titular' character runs into some problems- she is starting to age fast again.
Can she find a cure?  What will the cost be? 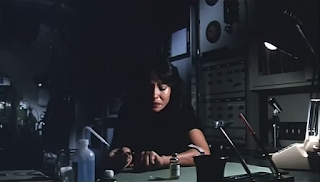 She captures the fiancée of Hudson's Son, convinced that she can take some enzymes (or something) from her unborn child to stop the aging process.
This won't end well. 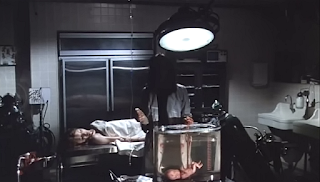 It does not.
Hudson's Son is killed by the woman, the removed fetus is knocked over, his equipment/notes are destroyed...but I guess the Daughter-in-Law might live. 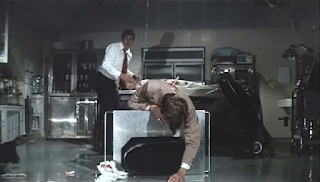 He chases down his experiment, leading a fiery car crash.
She's rapidly-aged to look like she's about 90, but she's also pregnant due to her hooking up with Hudson earlier.
As he's dragged away, we get a black screen and a baby's cry.  Sequel bait?  The End. 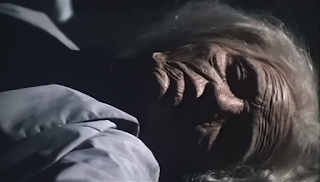 A silly, but self-important Film.  I didn't mention it earlier, but the Film begins with text explaining that the Science in the Film is based on real experiments.  They obviously go beyond what was viable at the time (or now).  Did they need that though?  Is it like the 'this really happened- for real' taglines/text crawls you'd get.  Remember the guy from Texas Chainsaw Massacre?  What a liar.  This sets the tone up for you and boy is it serious.  The Film is chock full of narration and science talk.  I think your average Episode of House has less medical jargon than this Film.  I wonder if Rock Hudson had the slightest idea what he was talking about in that Booth.  The Plot is decent, but adds nothing new.  She is evil because she doesn't have a soul...or something.  Ultimately, she just wants to stay alive- how dare she?!?  Yes, she does bad things.  Yes, that dog is apparently evil too.  Do they explain it?  No.  I guess if you artificially-age a dog outside of a womb, it is just plain evil.  Take notes, kids!  Embryo breaks no new grounds.  It's another one of those 'someone is evil because reasons' Movies that were all the rage.  You know what I mean.  It's not great.  It's not terrible.  Hudson was at least trying here, so good for him.  On the plus side, it is Public Domain, so go nuts.  As for me, I'm just wondering why the Husband of a Syrup Mascot did Make-Up work... 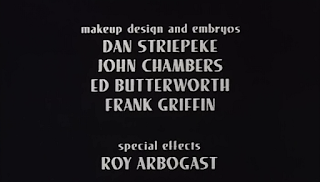