As I prepare for some fun Creature Features in October as part of The Madness, I might as well stretch first.  This is Killer Crocodile, a 1989 Film from Italy.  Guess what it is about.  Yeah, there's no subtext here.  It comes to us from Fabrizio De Angelis, a man known far more for Producing than Directing.  Yes, this is working on the idea that you know him from anything.  As a Producer, he worked with Lucio Fulci on Films like Zombie, The Beyond, New York Ripper and The House by the Cemetery.  As a Director, he did stuff like, well, Killer Crocodile.  He's all over this Film too, as he's the Director, Producer and Co-Screenwriter (alongside Dardano Sacchetti).  Aside from being a very prolific Italian Screenwriter, Dardano has my favorite Italian name to say.  Try it- it's fun!  So yeah, this is sort-of, kind-of Jaws, but made after all of the good Films and bad ones had come out.  It's not as flagrant as many others around this time- especially The Last Shark- but you can't ignore it.  If you somehow don't get it from the Plot, the lovely, but familiar-sounding Riz Ortolani Soundtrack will do the trick.  I'm sure that anyone could have copied the Jaws Theme- not everyone could have done it so well though.  The other named to note is Richard (Anthony) Crenna.  Yes, it is the guy from Rambo...'s son.  Can he kill the creature?  To find out, read on... 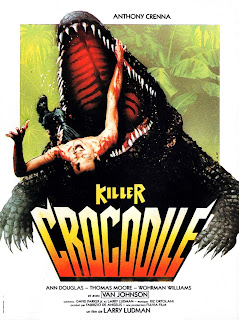 In a Cold Open, the titular creature kills some people.
Well, this is what we're getting for the next 90 minutes, so strap in... 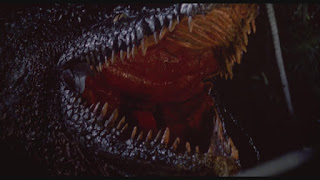 Our Heroes are a group of Environmentalists who are studying pollution on the River.
Naturally, the Mayor doesn't support them.  Do they ever in Jaws-style Films?
Oh and he's clearly the bad guy. 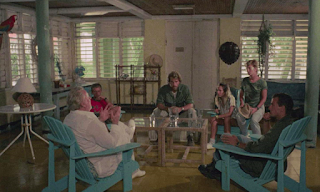 Reports of the Crocodile are ignored as none of its attacks leave a living witness.
That changes...

The conflict goes from external to internal as the Environmentalists must balance their desire to save and study this rare creature- grown large due to toxic waste- with their desire to see it stop killing people.
The Mayor, meanwhile, hires Not Quint to kill the beast...and also keeps letting the other guys dump their waste.

The Crocodile isn't shy in this one, so I guess Bruce just wasn't as committed to being in the shot as Brix. 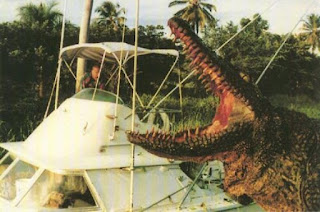 Our Heroes have to get over their desire not to kill the beast.  This is aided by it killing a couple of their friends and wrecking their boats.
They team up with Not Quint to take out the beast. 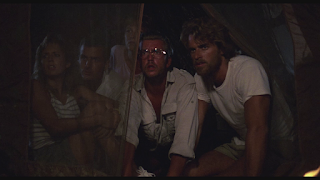 As for the bad guys, they go out to dump- wait for it- one last bit of waste.
They die. 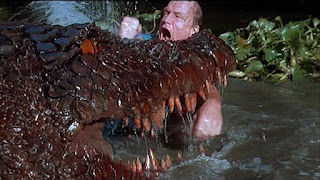 Crenna has to become the Hero of this story due to two reasons:
1) The Film's refusal to let 'the girls' be a part of the action.  They get sidelined- twice!
2) Not Quint's curious plan to ride on the Crocodile's back and stab it as it submerges.
Shockingly, he's not dead! 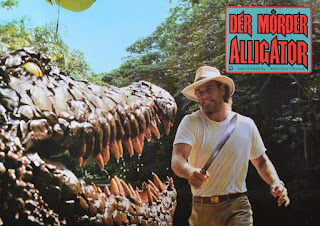 He pops back up for the finale as Crenna and his pal confront the creature one last time.
Not Quint throws his hat to Crenna (see above) and he does the only logical thing- throw the boat's propeller into its mouth.
It explodes and kills the creature...but a spawn remains.  See you in the Sequel! 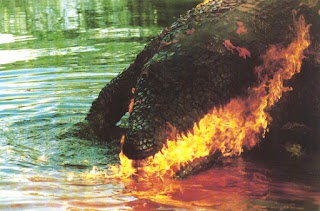 A Film with no surprises, but is that so wrong?  Killer Crocodile is a cheesy, but otherwise well-made Film that clearly was inspired by Jaws.  Have I made that point 1,000 times yet?  It is obvious, but it is true.  The Film was shot in a Foreign Country- not Italy, which is also Foreign- and that gives it a nice atmosphere.  It is also not The Philippines, so you-know-who isn't here.  To the Film's credit, the monster does look good and it shows up just enough to not look too fake.  The worst you can say is that the eyes look *a little* too unreal, but it is a Crocodile.  This one seems to have the desire to kill specific people, as opposed to dealing with its natural prey.  I guess maybe that throwaway line about 'not seeing any birds' is supposed to imply that it already ate its way through it.  Of course, if the toxic waste made it grow, why not something else?  Is it too much to ask to have Giant Monkeys fighting a Giant Crocodile?!?  My biggest issue with the Film is really how they treat the Female Characters.  They basically get to hang out, be scared in the background and then get left behind.  Imagine if Ripley was told that she was 'too scared' or 'had been through enough' at the halfway point of Alien?  It's so...odd and just plain silly.  Our Heroes aren't exactly expert Trackers, Hunters or Killers, so what can the women not do that they can?  Something something different time- whatever.  Pointless misogyny aside, Crocodile is a fun B-Movie that will distract you from all of the awful 2020 things, so watch the Film or enjoy the sweet vinyl... 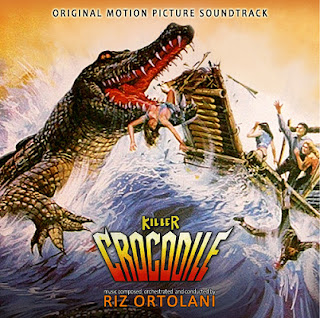 Next time, we stick with the same Year, but return stateside.  It's a New Concorde Film that was 'inspired' by Alien- how unique.  Stay tuned...